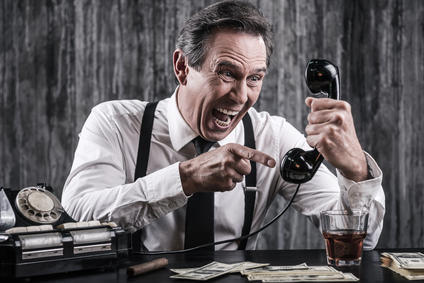 There's danger in letting your prospect end a sales call or sales meeting. Often times, they do it for the wrong reasons. You need to pay close attention to their behaviors, because those are signs of underlying expectations they have. And they may not be based in reality!

A client of mine was recently talking to a prospect on the phone. They had mentioned a larger competitor of my client's. To dig into that, my client asked, "I'm curious, why are you talking to me instead of them?"

All of a sudden, there was silence on the phone. My client quickly realized the line was dead, so he called the prospect back. Unexpectedly, the prospect started yelling at him, and hung up. It turned out he had hung up on purpose the first time.

At that point, my client decided he had nothing to lose, and called back one more time to see if he could find out what happened. This time, he started out by apologizing, even though he wasn't completely sure what had happened.

That third phone call ended up turning into a thirty minute conversation. It turned out that the prospect was looking for a provider that was, "hungry like me."

It's a good example of how we never know what's going on behind the scenes. When we observe behavior that seems unusual, or even hostile, we can be tempted to end the conversation.

Instead, he called back one more time, and asked questions to uncover the truth. The prospect was wanting to find someone who would do the work for cheap or free. Then my client ended the sales interview, instead of letting the prospect do so.