A Shortcut to Self-Awareness on Sales Calls 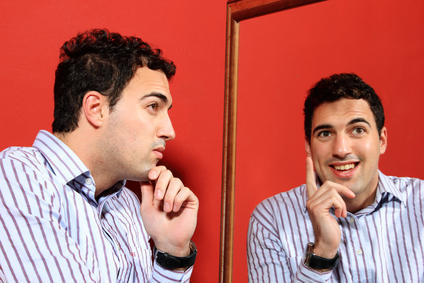 Have you ever been taped giving some sort of a presentation, then listened to your audio later? Or, even worse, watched yourself on video later? Was it what you wanted to see? For many of us, the answer is no! Our response is, “That’s not what I’m like!”

Did you know the same thing happens on sales calls?

The first time I ever watched myself after I gave a presentation, my immediate thought was, “What in the world was that person doing? It looked like me, but I don’t think it was me!”

You tend not to be able to see things clearly from your own perspective. If you’re an extrovert, and you have a sales call with someone else who is an extrovert, what’s likely to happen?

You go back to the office, and your boss asks, “How did the sales call go?”

“Great!” you respond. “We talked for a couple hours, and really clicked!”

“Well, what are the chances they’re going to buy from us?”

“Uh,” you say, gulping. “I didn’t really think about that part.”

Now, I’m not picking on extroverts. Everyone’s going to have something similar, though it will be different for each individual.

So how do you avoid that? How do we build up self-awareness on sales calls?

If you’re an extrovert, what if you had someone along with you who wasn’t one? Do you think they would have a different perspective on what happened?

“Sure it went great,” they might say. “Except you didn’t find out who the decision makers were, you didn’t talk about budget, you didn’t uncover their pain… It was great, except you missed all the key steps!”

When you get a chance, take someone else from your office with you on a sales call. And if you’re not in a situation to do that, find a friend or business contact who really wants you to succeed and is willing to go with you. Preferably, someone who has a different style than you, and definitely someone who is willing to be brutally honest.

After the call, have them debrief with you. They’ll share what they saw, and you’ll be on the path to improving yourself. After all, it’s hard to fix things about yourself if you’re not aware that the problems are even there.